Here is how you can help to save the dolphins.


While the biggest factor behind the diminished numbers of large baleen whales has been whaling, dolphins, albeit hunted in some countries, are generally not hunted and their numbers were not drastically diminished in the whaling history. 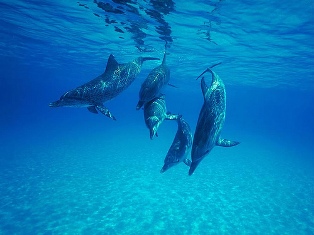 
Instead, being smaller, dolphins are much more often than the large whales taken by predators such as sharks and killer whales.

Like the large whales, dolphins suffer from water pollution, since the chemicals released in water can cause different diseases.

Like baleen whales they suffer from noise produced by boats (both whale and dolphin ears are very sensitive), and competition with fishermen.

Unlike the large whales, which most often are strong enough to break fishing nets or at least pull themselves up to the surface to breath, dolphins are killed when accidentally caught in fishing nets.

One thing that particularly kills dolphins is plastic bags in the water. Because dolphins eat jellyfish, they will mistake a plastic bag for a jellyfish and swallow it - causing obstruction in the digestive system and death.

Therefore, it is not only important to not to throw plastic bags into the water or leave them on the beaches, but also pick one up and put into a trash can.

Almost certainly you will just have saved a life of a dolphin because once in the water, it's only matter of time before a dolphin swallows a plastic bag and dies!

So the main things to do to help to save dolphins are:

* not to pollute water and particularly remember the plastic bags, (they are one of the worst)

* be against overfishing, (The dolphins gotta eat!)

* be against over-shipping due to the noise that they create

* help clean up the beaches (We have a community beach clean-up once a year in my community. About 40 miles of beaches get cleaned up and most of the garbage goes into recycling instead of the ocean!

Return to Save the Whale