Save the Whale Populations


Here is how you can help to save the whale populations.

Large whales don't have many predators. The biggest threat is humans! 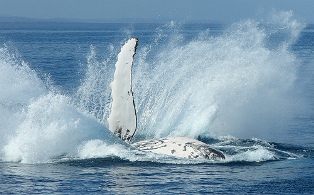 By Michael Dawes via Flickr.com


While calves and sick individuals may sometimes be taken by sharks or killer whales but generally, they don't pose a threat to large, healthy baleen whales.

However whaling, particularly in the last century, cut their numbers down by 90%.

Another human-caused threat is water pollution which causes a huge amount of different diseases and death.

Sometimes areas are over-fished and the whales are not left with enough food. They also use fishing nets that entangle whales and dolphins. (People need to eat too. We just need to be mindful of the whales.)

Then there is noise from boats. Whales rely on a form of sonar to locate food and they use a variety of sounds to communicate with each other. Noise from boats and ships interfere, making survival even harder.

Here are some ways you can help save the whales:
* Protest against whaling, sonar testing and over-fishing

* Do not eat any whale meat or buy any whale products

* Do not pollute water or environment generally

One way to keep up on current whale news is to read my Whale News Page.

We all need to work together if we want to make a difference!

More - Save the Dolphins