There are some great places for whale watching in Maine.

Along the whole coast of the US state of Maine, whales can be spotted between April and October each year. 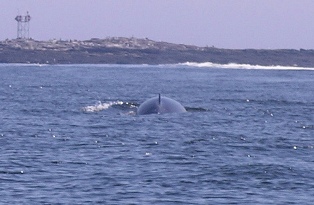 
They can be seen surfacing and interacting as they swim on their annual migation route between northen feeding grounds and southern breeding grounds about 20 miles off the coast.

The most common ones are humpbacks, finbacks, minke and pilot whales, while occasionally others such as right, killer, sperm and sei whales can also be seen.

The best way to watch them is of course a whale watching tour, which takes you really close to them.

Such cruises are available for example from Boothbay and Bar Harbour, and Kennebunkport.

But it is possible to see them from vantage points on the coast as well, particularly if you have a good pair of binoculars, or visit some of whale watching points which have coin operated binoculars.