In the waters off San Diego, more than 20,000 gray whales pass on their annual migration between the northern, Arctic feeding grounds and southern, Mexican breeding grounds. 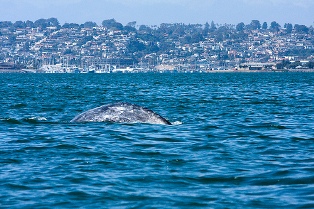 Grey whale in San Diego. By Port of San
Diego via Flickr.com


They pass San Diego between mid-December and mid-March.

The best way to see them is to join one of the tours provided by whale watching tour operators.

They will take you out to the ocean so that you can see the whales closer.

But you can also watch whales from San Diego itself.

Birch Aquarium in La Jolla and Cabrillo National Monument in Point Loma have viewing areas, the latter is complete with an infoors observatory with exhibitions, interactive tools and a Whale Fest during January and February.
San Diego Whale Watching