There is lots of interesting New Bedford Whaling Museum.

It is in the Whaling National Historical Park in New Bedford, Massachusetts, US. 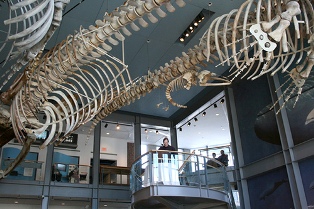 
The most impressive things are the interactive model of the world's largest whaling ship and four large whale skeletons, including the ones of a Northern Right Whale, and a Blue Whale - the largest animal that has ever lived on the Earth.

There are also other interactive exhibits, displays of whales and whaling as well as art, antiquities and cultural artefacts. On the first level are the Museum store and theatre, ECHO Resource Center and Jacobs Family Gallery.

On the second level are displays and exhibitions on whales, whaling ships, whaling history, as well as art. On the upper level are Bourne Building Balcony, San Fransisco Room and the Observation Deck - with some great views over the harbour of New Bedford.